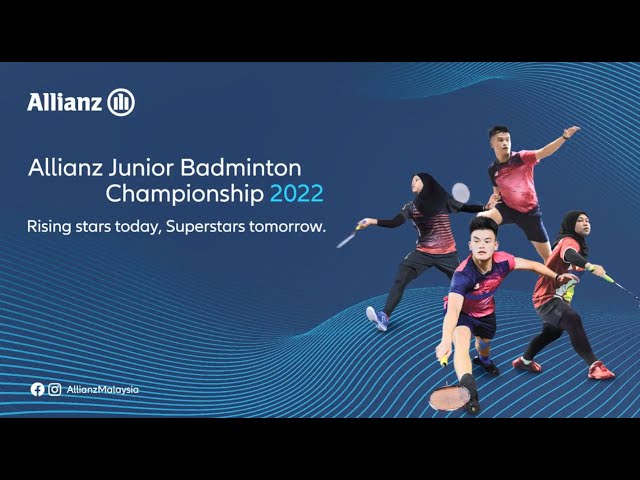 Let's hear what our players have to say about AJBC!

Aina defeated Wong Le Xuan 30-12 in the first round of the under-15 girl’s singles, while Aida received a bye. The twins will also compete in the doubles event at the Sports Arena Puchong.

"We are confident of performing to our expectation. It is a very challenging tournament with talented players from all over the state," said Aida, who with her sister is looking forward to reaching the finals of both the singles and doubles events.
Dillon Choo: It's not over for me
Multi-talented Dillon Choo faced disappointment as his journey in the Allianz Junior Badminton Championship ended with a second-round defeat to Yap Chun Le in the under-15 boy’s singles category..

Dillon, who also holds a junior black belt in taekwondo and is a competitive swimmer, is determined to learn from his mistakes and improve his game further.

"I am very disappointed by the defeat. I made too many errors and have a lot of areas to improve," said Dillon, who received a sports scholarship to pursue his studies at Sunway International School.

"I only started playing badminton in 2019 and enjoy the game. But today's defeat is a learning experience," he added.
Good show, Allianz
The Allianz Junior Badminton Championship (AJBC) earned the seal of approval from parents.

Hisham Helmy and his wife Maria Salehuddin, the proud parents of Hisma Aida and Hisma Aina, were excited to see their daughters in the thick of the action.

Hisham revealed that Aida and Aina dream of representing Malaysia one day and is happy his daughters can compete and sharpen their skills.

"We are excited. AJBC provides my kids an avenue to test themselves and compete against players of various skill levels,” said Hisham.

"Today, I picked up new tips on how to smash. I enjoyed the session. I hope Allianz will organise more coaching sessions and tournaments," Aska said.

Amsyar echoed that he was equally excited about the opportunity to learn from the former national stars.

"It's not always that we get to watch and learn from good coaches. Not only did I get to improve my skills and knowledge, but also I made so many new friends."

The duo, playing their first tournament together, combined superbly to deliver a stunning performance, beating Hafiq Haikal and Muhammad Aliff Ikhwan 30-4 during their first-round match.

"This is the first time we partnered up, and I am happy with our performance," said Tham, who studies at Taylor's International School.

Garnering support from his parents, Miqhael and Rozita, Rizqin is determined to manage his nerves and go the distance.

"This is my first big tournament, and I am nervous," said the 13-year-old SMK USJ 23 student.

"I aim to advance to the semifinals stage," he added.

The AJBC Qualifying Round One at the Sports Arena Puchong featured 370 young players and bore witness to a full range of emotions from happiness and excitement to jitters and even tears from the young players, many of who are competing in their first tournament.
Help & Services
Our Products
Why Choose Allianz
Our Unique Offerings


We are Allianz. We are here to make insurance easy and fitting for you.